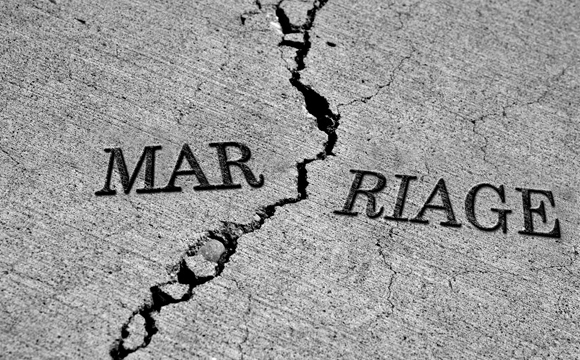 “Love is an earthquake meant to relocate the center of our universe,” writes Mike Mason in his brilliant book, The Mystery of Marriage. I wish I had known that this was to be expected. During our first decade of marriage, the tectonic plates shifted and pitched me off balance so frequently that I assumed I was a failure at this until death do us part thing.

We both approached the altar well aware that we were broken people. Despite our best efforts to heal our family of origin wounds before exchanging vows, we crossed the threshold with seriously overweight baggage. I can still remember the pre-marital session when our pastor became notably quiet and gentle before sharing the results from our compatibility test. We were off the charts—in opposite directions—on several key personality/behavior traits: particularly communication. Growing up, I trained myself to be invisible, to disregard my needs, and to prove my worth through excellent performance. My husband learned that if he wanted connection, he had to dominate conversations and overpower his exceedingly vocal family members. Speed bump number one.

At some point in the early years together, I had daydreams about leaving, not for anyone else, but because I hated feeling so incompetent. I wanted to love him well. I wanted to extend God’s grace and mercy on a daily basis, but the best I could do was a C+ every third day.

Fear of losing. Fear of giving all that I had and then simply collapsing in on myself. Fear of my offerings not being received or reciprocated. Fear of conflict if I spoke up. Our arguments back then largely centered on hurts due to my unmet expectations. Given my background, it’s not surprising that I was rarely able to articulate those longings or needs until after I knew he had not met them. As you might imagine, this was profoundly unhelpful.

We hit a wall around year ten. The exact reasons for this collision seem inconsequential now. We fought against each other and for each other. We cried. We asked for help. Grace was extended piecemeal and begrudgingly. The heat of this crucible felt excruciating, scorching, and at times, unbearable. But then, mysteriously, sufficient dross rose to the top and something new emerged. I took metaphorical voice lessons so that I could begin revealing my needs and feelings in real time. He started listening more attentively. And as the fear subsided, I stopped chaffing against the “one-downsmanship” (Mason again) which marriage requires. As the aftershocks diminished, we both began to understand what John the Baptist said of Jesus, “He must increase but I must decrease.” Marriage is less about getting what we want and more about laying down our lives. When a relationship is built upon this counter-cultural philosophy of mutual sacrifice, victory comes through surrender.

Such relationships are not for the faint of heart. Mason refers to marriage as “an unrelenting guerrilla war against selfishness.” He continues, “Love convinces a couple that they are the greatest romance that has ever been, that no two people have ever loved as they do, and that they will sacrifice absolutely anything in order to be together. And then marriage asks them to prove it.”

In my experience, we are only able to prove it when we admit our limitations and accept the resources that God and others offers. I wish it was not so—I would much prefer to claim credit for any love I offer my husband. But as I look back over our 23 year marriage, it’s obvious to me that we are still together because we have both willingly chosen to be transformed into the image of Jesus and to die so that the other may live.

There might always be several fault lines running through the center of our marriage but at least we now know that the cracking and shifting are all part of what it means to be joined together in holy matrimony. And God, it seems, will always function as our emergency preparedness kit.