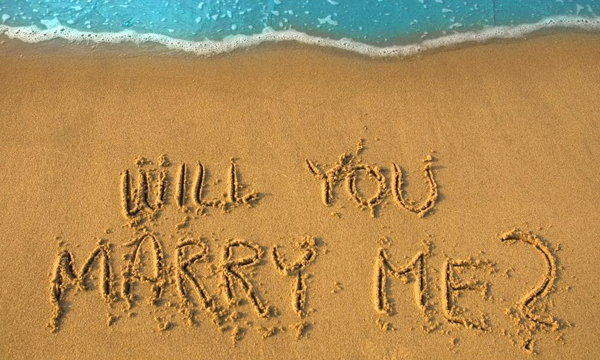 The dreaded “M” word: marriage. Most people who are dating avoid using this word for fear it might drive away their newly found love interest. At some point, though, both people need to know if the relationship has marriage potential. A conversation about marriage is not only inevitable but necessary.

How soon is too soon to bring up marriage?
A good general rule of thumb is to leave marriage out of the conversation until you know if there is even the potential for a relationship between you and the person you are seeing. On the first date, you may quickly discover that the two of you are not a good fit at all for each other, which would negate the need to discuss marriage. It may take several dates before you determine that. Bringing up marriage as the first topic of discussion on the first date is something I would not recommend trying.

When is it okay to bring up marriage?
There is no formula spelling out exactly when it is okay to broach the subject of marriage. However, I can assure you that the first date is not typically the best time. On the other hand, waiting seven years is a bit much. There is a happy medium.

For the first several dates, I would recommend steering clear of the topic of marriage. If you are purely focused on whether or not this person is ready for marriage, you might miss out on whether you are even a good match for one another. Take those first few dates to see if there is a connection between the two of you or not. Find out if you enjoy spending time together, have things in common, can carry on a good conversation, and if there is potential to continue seeing one another. If there is no connection, then there is no point in stressing yourself with discussing the topic of marriage. Slow down and get to know the person.

If after several dates you both are feeling that your relationship is developing into an exclusive one, then you can begin to explore whether or not your lives connect on the deeper, more important issues. Marriage potential can be explored without necessarily mentioning the word marriage. Discuss upbringing, life goals, life philosophies, religious beliefs, interests, hobbies, and other important issues that you should consider in a potential spouse. Again, if you begin to discover your lives are not aligned, there is no point in having a conversation about marriage. If, however, you are finding that this person is genuinely someone you would be interested in having a long-term relationship with that might ultimately lead to marriage, then you can begin to think about approaching the topic of marriage with him/her.

How should I approach the conversation about marriage?
There are several ways to have the conversation about marriage with your significant other. First of all, I think it is important to make your intentions about marriage known. Once you have reached that stage in your relationship where you are considering an exclusive, committed connection, it would be good to mention that your purpose in dating is to ultimately find a spouse. I would recommend doing this in a genuine and sensitive way. Don’t cop an attitude and get demanding and defensive about the topic. This is a big deal and addressing it with sincerity and caution allows the other person the freedom to speak openly and honestly.

If you have determined you are in agreement that the purpose for dating is to ultimately find a spouse, then you can begin to consider having a more in-depth conversation about marriage. If you are still dating by around six months, then bringing up the potential for marriage is realistic and recommended. Test the waters to find out if this relationship is a worthwhile investment for both of you.

Is there a point when marriage should be addressed?
Typically, I would say that around the one year mark, you should feel comfortable to openly discuss the future of your relationship. By this point you should know whether or not this is a person you can reasonably see yourself spending the rest of your life with. If you are still unsure or have not even begun to discuss future plans with him/her, then that is a good indication that you are not on the track toward marriage and should reconsider moving forward in the relationship.

On the other hand, this does not mean that at the one year point you should be demanding, expecting, or proposing a ring. This just means that you should be honestly assessing the long-term potential of your relationship. Studies show that there is an infatuation stage that lasts an average of two years. During this two-year period, individuals are often blinded to the reality of the relationship. They will tend to overlook flaws and mistakes by his/her significant other, as well as be on best behavior. This is the time where couples are still putting their best foot forward. That is why it is important to consider this “disillusionment” stage before taking the next step forward into marriage.

If after one year your significant other refuses to discuss the potential for marriage, I would warn you that this relationship might be headed nowhere fast. It would be wise to consider why he/she is so reluctant to discuss marriage. Perhaps there are commitment issues there, or he/she may not be as interested in the relationship as you are. Whatever the reason, you should seriously consider whether or not this relationship is one you should continue investing your time, emotions, and energy into.

How do you handle the other person’s reaction, good or bad?
Remember that the point of bringing the subject of marriage up is to find out if you are on the same page, not to convince him/her they should feel the way you do. Their answer is part of the equation of figuring out if you are a good fit for one another.

If your significant other reacts poorly to the topic of marriage, there are several things to consider. First of all, I would attempt to gently inquire as to what is so upsetting about this topic to him/her. It may be that he/she has seen a lot of marriages fail and is afraid of repeating that cycle. It may just be that he/she is not interested in marriage. Whatever the reason, there is only one way to find out: straight from the horse’s mouth. Create space for him/her to be honest with you. If, indeed, he/she has some issues surrounding the topic of marriage, consider if they are problems that the two of you can overcome together. If they are, then consider seeking professional help to work through them. If they aren’t, then you are in a better position to know that this relationship is not the one for you. If the reasons for not wanting to discuss marriage are out of a lack of desire, then again you have your answer.

Finding out if your relationship is headed in the direction of marriage is important. Remember though, the purpose of dating is to find the person who is the right fit for you. While it is important that he/she is interested in getting married long-term, don’t allow that to be the all-encompassing focus where you lose sight of other important factors.

Ashley McIlwain, M.A., is a Marriage and Family Therapist, speaker, and writer. She is the founder and C.E.O. of the non-profit organization, Foundation Restoration, and blog LittleWifey.com, which are comprehensive resources committed to restoring the very foundation of society - marriage. She is committed to and passionate about helping relationships thrive. Ashley holds a bachelor’s degree in Psychology from Palm Beach Atlantic University and a master’s degree in Clinical Psychology with a specialization in Marriage and Family Therapy from Azusa Pacific University. Ashley previously served as Managing Editor for StartMarriageRight.com where she helped launch and develop the website into a hub for premarital preparation. Currently she and her husband, Steve, reside in Southern California.