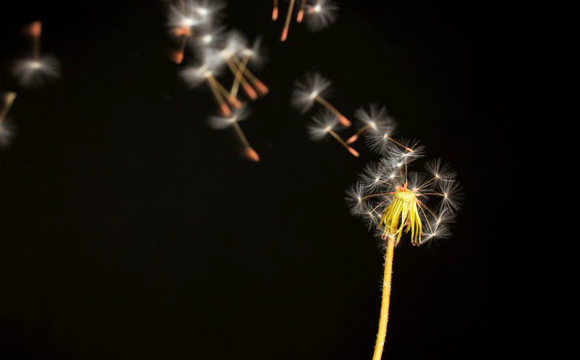 In the weeks that led up to our wedding, my soon-to-be husband Ted informed our friends, family, and anyone who would listen of his impending death.

Yep, death. Death, that is, to his single self.

You know, the self that could buy a new Nord Electro on a whim. Or stay up until 2 a.m. on a regular basis. That guy who worked late into the evening because he didn’t have a wife waiting at home.

Some greet this realization with terror. Not Ted. He wasn’t one of those grooms who shows up at the church with a white face and knocking knees. Nope. He was beaming with excitement, genuinely ready to kiss the old life goodbye and me hello.

Sure, death isn’t the most romantic thing to broadcast prior to one’s nuptials, but Ted was right. Marriage doesn’t jibe well with many of the single habits brought to it.

What I don’t think he anticipated, though, was that the death of old habits is like Inigo Motoya’s infamous hunt for the six-fingered man. It takes a while.

PREPARE TO DIE!
Even though Ted was eager to die to singleness and embrace marriage, his single self didn’t change overnight. The same was true for me. It’s a process. Over a decade later, we still have to exclaim at times, “Prepare to die!” But what I think has made the biggest difference in our marriage is that we’ve both allowed the process to proceed in its own timing. We haven’t forced the other to miraculously transform.

How about you? Do you have a Goldilocks attitude toward marriage? Do you get frustrated when your spouse’s change isn’t “just right”? And to clarify, I’m not talking about sin patterns where there’s no growth or desire to change. That’s different. I’m referring to those areas where your spouse seeks maturity, but the pace may be slower than you’d like.

The thing is, how we respond to our spouse as those old habits die can make a huge difference in the quality of married life. Here are two practical ways to extend grace for the old as you both work toward the new.

GRACE FOR THE OLD
Have a realistic view of yourself. Maybe your spouse leaves his or her clothes in a heap on the walk-in closet floor. I’m guilty of that. With each and every trip to it, it’s hard not to grow frustrated as you step over the obstacle course of discarded shirts, jeans, and socks, in your attempt to reach your hoodie. Before you heatedly or condescendingly address this repeat problem, take a moment to put it in perspective.

Do you have any “walk-in” closet habits? Maybe you leave the bathroom sink a mess in the morning. Or you leave crumbs all over the counter after you make a sandwich. Maybe these habits really bug your spouse.

When you realize, “Wait, I bet that is annoying,” it’s easier to show grace. It’s easier to go to your spouse with an attitude of humility and say, “Hey, I know that I leave the bathroom a mess every morning. I’m sorry, that’s something I’m going to work on. You know how that bugs you? Well, I feel the same way about your clothes on the closet floor. Do you think that’s something you could work on too?”

Focus on trajectory. Ten years of marriage later, Ted doesn’t buy a Nord Electro on a whim. He also doesn’t stay up until 2 a.m. on a regular basis. The working late thing is still an area under construction. I could easily be frustrated that he hasn’t mastered perfect time management of his work duties, but I’m not.

Instead, I look back at the areas there has been change — whether big or small — and I understand that it takes time. I focus on “trajectory,” or the “path, progression, or line of development” of change. In her article, “Faith for the Man He’ll Become,” author Carolyn McCulley speaks to single women as they consider potential husbands. She writes:

There is a learning curve to a man’s leadership as a husband and father. The qualities you can see in a 50-year-old man’s life were developed over 50 years. There are 25 years of growth ahead for the 25-year-old man before it’s fair to compare them. While you are called to be discerning about the characters of men you befriend and court/date, you also have a part in encouraging these men to grow. In fact, that’s part of your learning curve as you prepare for being a wife.

Her advice applies well for both wives and husbands after marriage too. Marriage doesn’t bring immediate transformation; there’s a learning curve for us all. When we embrace this, it’s a lot easier not to nit-pick over those old habits that don’t instantly disappear.

It may seem inconceivable to you now that certain habits will change. But, just as Inigo Motoya’s quest for the six-fingered man ended with success, both you and your spouse can kill old habits with time. I’ve seen it happen in my own marriage. Ted’s not where he was ten years ago, and I know he won’t be where he is now a decade from now. He can say the same for me.