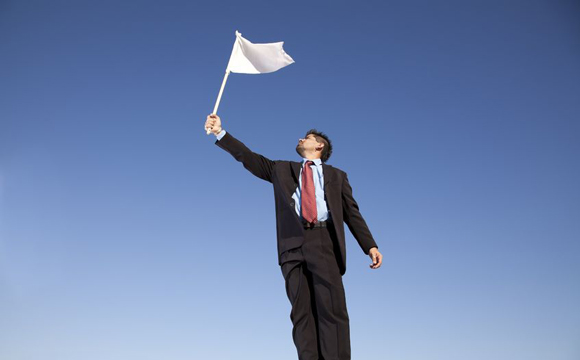 “The two of you—together—raise a lot of red flags for me.”

My eyes shifted from the man behind to the desk to my boyfriend, and back to the man behind the desk. I doubt this gentleman could tell you the name of my two-year-old son, or even guess my favorite ethnic food, but he had me pegged. My face flushed with embarrassment and I glanced at the office door, wishing to escape before anyone discovered that I was the red flag.

“Yeah, I don’t see them,” my boyfriend responded. It was his co-worker and his ministerial office, so I was going to let him do the talking. “Why don’t you tell me what they are for you?”

I tuned out of the conversation and made my own list:

The list was long and the office was getting hotter. I wanted to leave and not come back. I wanted to negate this entire relationship before he had the chance to hurt me. I had no right to be dating the guy next to me. He was a good guy—a pastor at that—and I was a tattered scarlet flag obscuring the purity of his entire life.

We left the office that day each with our own emotions. I felt deflated with disapproval. My boyfriend was a little inflated with anger. Neither of us cancelled the relationship, however, and today we’ve been married for over ten years. That said, the red flags have stuck with me. During those first few years of marriage—when hot tempers blasted before deaf ears—I would wonder, Are these the red flags the guy was talking about? When we’d go to bed angry I’d wonder, Did he know this was going to be so hard? Did that guy not think we’d make it? When our marriage almost crumbled and I was certain there would be little left of “us” because “I” was exhausted, I thought, Do I wave the white flag of surrender?

It took the better part of seven years, but I have learned that the answer to that last question is “yes.” Always wave the white flag. However, do not wave it in defeat, but rather wave the white flag of mercy—mercy for all things still living in your relationship.

Currently, we are in the process of waving a white flag of intimacy. For many of the reasons I first mentioned {above} about my old life, I entered marriage with the misconception that our bedroom was a battlefield. I’ve fought and retreated and fought again for almost a decade as I struggle to be a vulnerable and warm wife. My husband has argued, vented, and stonewalled during these tumultuous years. Finally, the process of healing has begun. Today, I would say these red flags of intimacy have faded to blush. We are both anticipating the day our bedroom is blanketed in white. The work is hard. The communication is raw. But the rewards are indescribable.

All marriages have conflict—some fight loud while others stew silent. The truth is that we all carry red flags in our lives somewhere. We’re broken and messy and those red flags are covered with the blood of Christ. Yet in some miraculous way, Jesus is in the business of transformation and purification. It’s by the Spirit of God himself that we are able to watch as those red flags bleach white. I challenge you today to pull out a red flag—something that has been waving so violently in your marriage that its kept you blind to the reason you first loved—and begin the process of waving it white. How? Through surrender. Repeated surrender. When we place our rights, our expectations, and our biting words down before God—through the very essence of who He is—He guarantees to transform. For the essence of the gospels is that all who encounter Jesus leave changed.