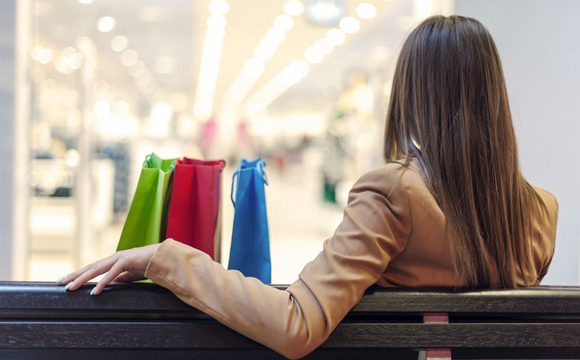 It’s hard to stash a shopping bag of secret contents into a closet from the early 1900’s. These closets are sometimes wide but never deep. Stash it low and the bag peeked out from behind disheveled shoes. Stash it high and my six-foot man was sure to be eye-level. I heard footsteps in the hall and opted for the ‘wide,’ tossing the shopping bag into a corner. He’d never reach back there—I hoped.

A few days later, I pulled the bag out, ripped the tags off, and slipped on my new shirt like it was an old favorite. I needed to look nonchalant, comfortable, and—of course—cute. That was why I had gone to all the trouble of secrecy, wasn’t it? So I could look cute? Besides, I justified my action, my appearance is part of what attracts my husband to me and that physical attraction is surely alright with God.

“When did you get that shirt?” my husband asked.

“This one?” I have big brown eyes and I tried to shoot him the sweetly innocent look rather than the deer-in-the-headlights look. “I’ve had this for…a while.”

Usually, by this point in the conversation I had slipped into the kitchen or was rifling through the fridge so that I didn’t have to keep up the charade. I hated lying to him, but I hated our newly-wed budget even more.

Truth be told, there have been lots of little secrets over the years. With each secret I kept, I convinced myself I was my own person and should be empowered to make my own decisions. The truth is that I am my own person and I do have a choice, but rather than investing my personhood and strength into the harmony of our marriage, I used them to indulge an attitude of selfish entitlement. Selfishness fostered discontentment, discontentment cultivated dissonance, and dissonance gave birth to lies. “I don’t need him; I’d be better off without him.”

My secret life now encompassed action and thought. Both had become habits. Secrets framed my every day in such a way that I was accustomed to acting within their realm. During a particularly challenging year in our ministry and marriage, I decided to get a part-time job. I was lonely at home and we could use the extra money. It was only a few months after starting that my secret purchases were soon dwarfed by a clandestine friendship. A parched marriage must draw water from somewhere and I was thirsty for attention. When it came in the form of another man, my ability to shirk my husband’s pointed concerns shocked even me. It was easy to justify my actions as I had been rehearsing for years.

What prevented me from having a full-out affair? The grace of God. I know it sounds trite, but it’s absolutely true. About the time I was about to make catastrophic decisions, this other man moved overseas; I was forced to face my husband and open communication about this secret life of mine. It was an emotionally-charged few months as each of us worked through baggage which we should have left behind before getting married. But, by the grace of God, we made it and the husband I once pushed away is now the man I call home.

So how do you break free of the secret life—whether large or small?

Where is the road to the home of light? Do you know where darkness lives so you can lead it back to its border? God asks Job (38.19-20).

I know how tempting it is to stash secrets and hope no one will find them. I remember the rush I would feel, slipping on that new top and looking at myself in the mirror. This is it, I’d think. I have enough shirts to last me a while; I don’t need anymore. The shirt wasn’t the only thing I stashed—the guilt, the conviction, the call to honesty—all those were stashed away in the darkest corners of myself as well. If I could do it all over again, I’d break the habit early and clothe myself in salvation (2 Chron. 6.41), righteousness (Job 29.14; Isa. 61.10), strength, and honor (Prov. 31.25).

If you are also bent toward secrecy and foster independence within your marriage, I encourage you to find the road to the home of light. Push darkness back to its boundaries. Walk free in transparency, vulnerability, and honesty and watch as your marriage shines with God’s glory.