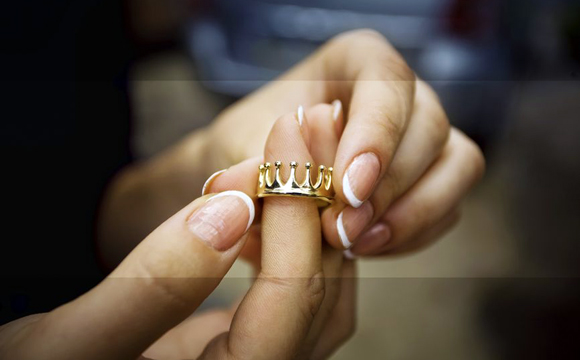 Six months into my relationship with Josh, I began to feel some intense angst. I struggled knowing for certain if he was “the one.”

Marriage is a big decision and one I wasn’t taking lightly. I did not look into the possibility of married life with romantic eyes. My parents’ marriage was something I did not want to emulate. I’d had an up close view to a marriage gone wrong and wanted no part of it.

I’d planned on staying single, envisioning a satisfying life as a career professional or dedicating my life to ministry. Being a wife or mother didn’t have much appeal for me.

But then my relationship with Josh deepened and I realized he was exactly the type of guy I was looking for—without realizing I was looking.

And so a struggle ensued in my soul, but also an epiphany.

Although many of my desires for remaining single were noble ones, my relationship with Josh revealed an issue I’d not expected: fear.

I feared marriage. Marriage meant being vulnerable and opening myself up to the possibility of hurt. It meant not being in autonomous control of my life. That was very scary for me. I wasn’t about to give up being single unless I knew Josh was “the one” God had for me. But how could I know for sure? I didn’t want to make the wrong choice and ruin my life.

At some point I realized two things that helped change my thought-process.

God’s Will isn’t a Scavenger Hunt
I’d been viewing God’s will as a scavenger hunt. I was looking for clues but afraid I’d miss them.

But that was a false view of God. God wasn’t trying to “hide” His will from me. He wasn’t playing cosmic hide-and-seek. He loves me and is sovereign over my life, working in and through my decisions in ways I can’t fathom. I saw this theme woven throughout Scripture as well as the tapestry of my own past.

God—more than anyone else in the universe—wants His will worked out in the lives of His children. He is not intent on hiding it from me but revealing it to me. But His will has less to do with where I work or even the mate I choose than it does with being conformed to His likeness. Take those famous verses from Romans 8:28-29: “And we know that in all things God works for the good of those who love him, who have been called according to his purpose.” We often stop there, but the verse continues to say, “For those God foreknew he also predestined to be conformed to the image of his Son…”

The struggle in my soul began to lessen when I realized God wasn’t hiding His will from me, but instead desired to lead me towards it.

My Soul Mate Didn’t Exist
Second, I realized I’d fallen under the Hollywood spell that “the one” exists. That only one person in the whole wide world was my soul mate and if I missed him, I’d have made a tragic mistake.

Like in that cute movie Serendipity. Boy meets Girl. There’s instant attraction. Boy loses Girl. And although they form long-term relationships headed for marriage with other people, they know “the one” is still out there. And so they ditch their fiancés and search for each other—because they are soul mates—despite the fact they only met each other once for a couple of hours.

It makes for wonderful movies, but life rarely works that way.

Gary Thomas believes the idea of soul mates can actually be a destructive concept. In a recent Family Life Today broadcast he said:

I believe the notion that we have to find ‘the one’ is one of the most destructive and unhelpful beliefs that Christian singles have today. I think it leads to more foolish choices than it leads to wise choices. . . . particularly, when I don’t see any scriptural evidence for it—when I have to go back to Plato and The Symposium to even seen this modern notion of a soul mate.”

I was struck with how simply Scripture discussed the decision to get married. In a passage directed to singles Paul writes:

If anyone is worried that he might not be acting honorably toward the virgin he is engaged to, and if his passions are too strong and he feels he ought to marry, he should do as he wants. He is not sinning. They should get married. But the man who has settled the matter in his own mind, who is under no compulsion but has control over his own will, and who has made up his mind not to marry the virgin—this man also does the right thing” (1 Corinthians 7:36-37).

If you want to marry, get married! If not, then don’t! No fleeces, fireworks, or words from God revealed in the sky.

The concept of a soul mate is so powerful because we believe that person completes us. If we’re in God’s will and marry our soul mate, we assume marriage will be easy. Love comes naturally. But if love becomes hard and trouble arrives, we may be tempted to think we missed our soul mate and ditch the relationship altogether.

But only God completes us. And Scripture is upfront that “those who marry will face many troubles in this life” (1 Corinthians 7:28). God never guarantees a trouble-free life and a soul mate cannot insure a perfect marriage.

The Risk and the Reward
It’s true, marriage is risky and singleness is safer.

“Marriage brings you into more intense proximity to another human being than any other relationship can,” writes Timothy Keller in The Meaning of Marriage. “Therefore, the moment you marry someone, you and your spouse begin to change in profound ways, and you can’t know ahead of time what those changes will be. So you don’t know, you can’t know, who your spouse will actually be in the future until you get there.”

So why take the risk? Because the reward can be so very great.

We marry a sinner, so in one sense we always marry an incompatible person. But when two sinners commit to grow, change, and work together something beautiful may be created. “The journey may eventually take you into a strong, tender, joyful marriage,” writes Keller. “But it is not because you married the perfectly compatible person. That person doesn’t exist.”

On July 26, 2004 I took the risk and married Josh. The reward has been nine wonderfully imperfect years I would not have wanted to miss. And if you asked me if he is my soul mate, I just might say yes.

Danielle Ayers Jones has been a contributing writer for the online magazine, Ungrind, and has written for Thriving Family, Clubhouse, Jr., Radiant, and Relevant. She also combines her love of writing and photography on her blog, danielleayersjones.com. It’s a space where she seeks to find beauty in everyday places, joy in hardship, and encouragement in unexpected places. Danielle currently lives in Maryland with her husband and three children. You can follow her on Twitter @daniajones.