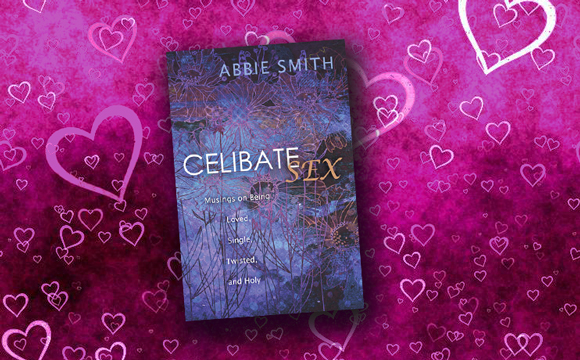 I was sitting in one of my favorite French bakeries in Charlotte, NC  when I first picked up a pre-released manuscript of Abbie Smith’s book, Celibate Sex. While sipping on my melange riche with Edith Piaf’s velvet voice playing overhead, I thought of all the people that I wanted to send a copy to once the book was published. Finally, someone was giving language to the relationship between sexuality and faith in a way that was both honest and sacred. I was thrilled when Abbie agreed to answer a few questions about her book.

Tell us about the title, Celibate Sex. How did you come up with that?

You got married before the book was published. How did that affect the project?

Not as much as you’d think. The project is more about being and becoming human than it is being single, or becoming married.

Yesterday my Facebook status said the following: ‘Showed-up to a weekly mentoring date this morning, worn from marriage and parenting. The gal’s singleness mentored me though, reminding me how crucial and thoughtful is the role of singles in our Body. I can become so fixated on earthly marriage, a temporary covenant, and forget grounding in my lasting one, with God (Matthew 22:30). Grateful for a sturdier mindset as I return home.’

This concept is very important to me, and to the larger Church today, I think. Too often we forget that there are advantages to singleness, and marriage shouldn’t be the next healthy expectation for someone after they graduate from college. In other words, marriage isn’t necessarily a marker of maturity in the Christian life, and too often it’s treated this way. We put too much pressure on single people that, ‘If they get their life like this, then Mr/Mrs Right will come along.’ That’s terrible theology though, on a number of levels.”

How has being married changed or enhanced your perspective of sexuality?

Often sexuality is equated with the physical act of sex, so one might assume that post-altar, my understandings of sexuality would’ve ‘blossomed.’ Sexuality can stand on its own though. It doesn’t need sex per se, and, in fact, we possess it from the day we’re born. Celibate Sex delves into this, our God-imaged sexuality, and existence as a sexual being, apart from the physical act of sex. What does it mean to be male, or female, and oriented by Christ? Explorations of one’s sexuality is a lifelong process and doesn’t start when one has sex, or end when one doesn’t. Meaning a priest, or twenty-year-old, or paraplegic can have a healthy sexuality. Also meaning a prostitute’s vivacious sex-life has zero correlation with her having a healthy sexuality (likely the opposite).

Now back to your original question.

Being married bolstered what I wrote in Celibate Sex, namely that sexuality is crucial to explore in every stage of life, including the single segment. Understanding what it means to be male, or to be female, oriented in Christ, is foundational to becoming who God has made us to be. In less academic terms, understanding how wearing lipstick or being secure in the shape of my thighs today (both aspects of sexuality) affects me will affect how I interact with my husband tonight. Why? Because understanding my sexuality affects how I view my self, and how God views my self, and those awarenesses affect everything.”

Neat question. Some biggies for me probably would’ve been:

A lot of it seems to revolve around ‘remembering’ what’s true about myself and about God. Interestingly my now married-self needs to hear these words just as often.”

Who would benefit most from reading Celibate Sex?

Abbie has agreed to give away a copy of Celibate Sex to one SMR reader. Comment below with your thoughts on “being and becoming human,” and a winner will be selected at random. You can connect with Abbie on Facebook and on her blog. For more information about Celibate Sex, visit celibatesex.com.

UPDATE: A winner has been chosen. Thanks for all the comments.