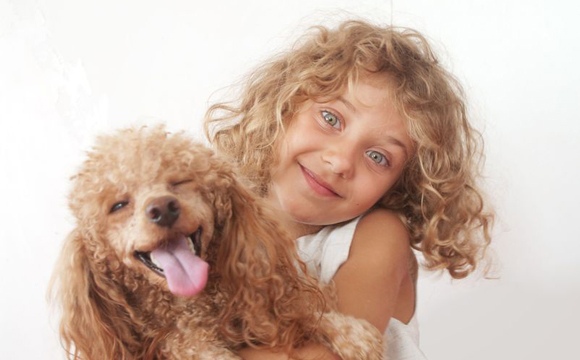 A few years ago,  my daughter had her first job pet sitting and I felt like, at her still young age, she might need a little bit of back up. We took in a toy poodle for the weekend and things were going smoothly until someone (who shall remain nameless here) let the dog out of the house by accident. Our calm Saturday morning at home turned into pandemonium as all 5 of us, plus a few helpful neighbors, sprung to action to find and retrieve this little black ball of fur.

My daughter was in a panic. This was her first real job as a hired pet-sitter and she lost her first client already! Stephen went in one direction on foot, and I went in another by car. It felt like hours had gone by before someone in our neighborhood spotted the little guy under their neighbor’s porch. Picture this: frightened poodle, feeling trapped under this porch (surrounded by lattice), with strangers cajoling and bribing with treats to come out. I’m sure it was a fun sight to watch, but it was NOT fun to experience!

All of a sudden, the little guy FLEW out from under the porch! And by some miracle, I was able to grab him by the collar. And then everything went dark.

Without warning, and in his own state of sheer terror, the small pup turned into JAWS and began chomping, chomping, chomping at my hands. Oh, the pain! He may have been small, but his teeth were like tiny razors cutting into my flesh and bones. And, then, in the blink of an eye, I realized I had a decision to make:

I could let go of the dog and tend to my wounds, and in doing so, lose him–possibly for good. And I’d still be in pain.  But I would not have the dog. Or, I could hang on until someone could come with aid and help me get a hold of him so that we could get him home and be able to return him to his owners. I’m glad to say that Stephen was able to show up fairly quickly with a blanket to help gather up the little guy and we were able to return him to his family; but I was left with wounds that required a tetanus shot and about 6-8 months of healing.

Why do I share this with you? Because I see so many couples choosing to give up on marriage when the going gets tough. I see couples of all ages lose sight of the value of life-long commitment due to pain in the present. I just sent a “Happy Anniversary” text to two of my friends who celebrate their 18th Anniversary this year. This same couple seemed to be doomed to fail on their wedding day. I will never forget comforting the bride’s mother as she cried while her daughter drove off. “Her life is ruined and I helped pay for it!” Oh, if she could have only known then what God knew then. Today, this couple has a loving, devoted relationship with one another and minister to other couples out of their experiences with the ups and downs of marriage.

Please don’t give up. If times are tough, it may be that instead of giving up, you learn to let go…Let go of unrealistic expectations. Let go of having to have things your way. Let go of comparing your marriage or spouse to what you perceive in others’. Let Go by giving these painful moments and wounds to your Heavenly Father. Let go by giving up control and allowing wise people come alongside of you while you tend to your wounds. If you give up prematurely, you’re still wounded, but you might just miss out on what God has in store for you as He brings His touch to your wounded heart and marriage.

Shelley Hendrix is the author of Why Can't We Just Get Along? as well as other titles. She is a speaker and television talk show host for Atlanta Live on WATC TV 57, and the founder of Church 4 Chicks. Shelley is honored to be married to her best friend, Stephen Hendrix, CADC II, and together, they are raising their two teenage girls and one spunky 10 year old boy. Find out more about Shelley at her website. Connect on Facebook and Twitter.