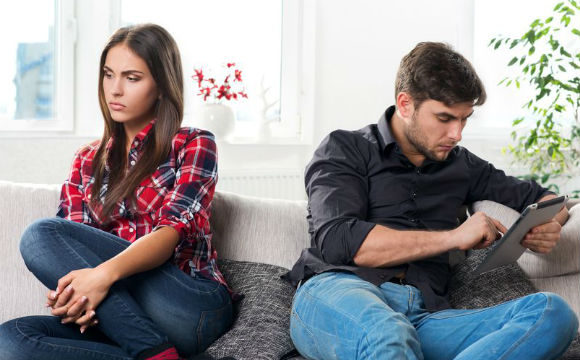 I have a love-hate relationship with technology. I’m a traditionalist. I majored in English and read old, “boring” literature. I’m one of those hypocrites who posts things on social media that mock social media.

Despite that, much of my day-to-day life utilizes technology – including writing this article. If you’re reading this, you’re doing so with technology. You either frequent the Start Marriage Right website, receive automated e-mail updates, or follow us on social media. You are viewing this through a computer screen, tablet, or smart phone (though why you’d choose to read an entire essay on that itty-bitty phone screen is a mystery to me!).

My slide down the social media slippery slope was a picky one. I don’t own a smart phone, so I can’t Instagram. I have more to say than 140 characters, so I don’t bother with Twitter. But I love Facebook. So instead of broadly covering the social media surface, I went narrow but deep. And that started to affect my marriage.

I knew my husband resented my Facebook page long before we finally fought. There were gentle words expressed. There were sighs of frustration. There was also my own recognition of how little I was engaging with him anymore. Somehow I – mock social media girl – had become addicted to checking my page for likes, comments, and shares. I loved the self-gratification of feeling popular and clever.

We finally had the fight after the ding of my Facebook notification caused me to pause our movie so I could respond right-this-second to whatever it was. Frustrated him, feeling downgraded on my priority list, finally had it and defensive me insisted he was exaggerating – I’m too old-fashioned to be a social media junkie. I mean, I still read books – in paper form, not just Kindle. I send handwritten letters and cards via the mail – the kind that goes through the post office. I couldn’t possibly have a Facebook problem.

In the end, he won the fight because I was too obviously wrong to justify myself. I promised to note my habit and be more considerate.

But then came Part Two of this story. It had been weeks since the fight. I was getting better. I still went on Facebook, but there was no more pausing movies. However, I noticed more of a change in my husband than in me. He suddenly stopped getting annoyed when I opened my computer. He even asked sincere questions about my social media interaction. Curiosity got the better of me. One night I logged into Facebook in front of him. When no longsuffering sigh resounded, I finally asked.

“You don’t seem to care that I Facebook anymore,” I said.

He then went so far as to apologize to me!

“I should have noticed that before making such a big fuss. I’m sorry.”

What?! This was not a gray-issue fight. I’m the one who was wrong. I’m the one who pushed him to the backseat and did things that made him feel devalued. And I am way too proud to appreciate being called lonely! I have a full-time job and some new friends and I love my time with just my husband and I – prefer it, even!

Sometimes our spouse knows us better than we know ourselves.

My husband and I moved due to jobs and I now live farther away from home than ever before. But you don’t need half the country between you and your family to have a need for social media fills. Maybe you switched jobs and have a new set of coworkers who feel like strangers. Maybe you’ve recently graduated and your roommates and friends have all scattered. Maybe you live in a rural area and the long days with little companionship stretch endlessly. Maybe you’re a stay-at-home parent seeking some adult interaction to balance a world of children.

And maybe posting old photos with corny hashtag captions gives you those things.

Having a reason doesn’t change the fact that my overuse of social media was wrong. I still need to be considerate of my husband (or whoever I am around). But it also has become common for him to notice something a particular friend of mine would like and recommend I “share” it with her. Together, we’re learning to balance technology.

We won’t make it home this Christmas and instead have plans to Skype with family while opening gifts. Admittedly, it sounds like the worst Christmas ever. The internet connection is never great, you can only see the people who are in direct line of the camera, and your time “with family” is moments instead of days. Traditional me is very upset about it.

But I’ll take moments over nothing at all. My grandma married and moved far away in an era when talking on the telephone was an expensive extravagance. Back a couple generations more and you have ancestors who emigrated from other countries, communicating home via letters that took half a year to reach them. And my military friends find Skype and Facetime second only to water. Who am I to complain?

As I have learned, there is always temptation to abuse a gift, to put it on a pedestal it doesn’t deserve. But your abuse of something doesn’t make the object evil. To jump to that conclusion would be to diagnose your problem incorrectly and leave the bigger issue there to fester. You don’t have to go on a “Facebook fast” to return technology to its rightful place…you just have to put it in its rightful place.