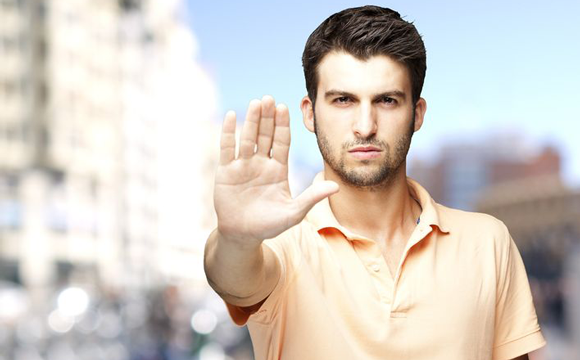 With college and NFL football games fading from TV screens across the country, it might be a good time to share a parting insight that can help men communicate more effectively with their wives. It involves a part of the game we often carry off the field and into our marriages – a communication pattern that isn’t difficult to fix, especially if we apply a little extra effort during the off-season.

Stiff-arming is an offensive strategy

Stiff-arming is a strategy offensive players use to push tacklers away as they head toward the end zone. If you’re strong enough, like Seattle’s Marshawn Lynch, it can add a few yards to every run. That’s how it works on the gridiron. But, as the following counseling appointment illustrates, stiff-arming can also describe a communication pattern that penalizes relationships.

Rob loves Kate. From the first pre-marital counseling appointment, I (Rich) could tell that he would do just about anything for her. The only problem with Rob’s love for Kate is that he blocks her attempts to love him–especially in ways that are meaningful to her. Recently Kate became aware that when Rob has a need, he rarely shares it with anyone. She’s not sure why, and Rob doesn’t feel it’s important to figure out. Kate hears Rob tell her that he loves her, but because he won’t talk about his needs or feelings, she questions his sincerity. Instead of welcoming her into his private thoughts, he stiff-arms his way through her every attempt to love him. Rob hasn’t learned that real love needs to be needed.

Love Needs to be Needed

I asked Kate for a specific example. She didn’t hesitate. Recently, when Rob missed a date night, Kate was confused and hurt–until she found out that he had been stranded with a dead battery. Her feelings changed to anger.

“Why didn’t you call?” She challenged.

“I didn’t want to bother you when I knew that I could fix it myself.”

“But you walked 3 miles in the rain back to your apartment to get your jumper cables, walked 3 miles back to the car, and then tried to flag down someone who would help you jump your car–why not just call me?”

Kate was exasperated. She had felt him push her away too many times. The impact became cumulative. Like pressure on an emotional bruise, each time he pushed her away the pain increased and the area it covered grew. Like most of us, Rob didn’t understand that each time he stiff-armed, the distance between them increased. Rich and I have seen this so many times before. If Rob had studied his communication with his wife the same way a player watches game film, he would have seen why stiff-arming is an offensive strategy. Like almost every fiancé, Rob needed insight from the “upper room.”

One evening Jesus scheduled a dinner with his best friends. They met in a second floor room. Their time together was somber. Almost immediately Jesus began talking about leaving them and the suffering that he would face. John, in his gospel, captures this moment in the thirteenth chapter. After they had eaten, Jesus removed his outer garment, wrapped a towel around his waist, and began washing the disciples’ feet. He did this to “show them the full extent of his love.”

As he moved from one disciple to another, Peter refused to have his feet washed. Jesus reminded him that his refusal reflected the possibility that Peter was not a follower. Peter immediately submitted.

It is easy to miss the point. We all see the Son of God, the creator, stoop and serve. In our minds, this is the lesson. But many husbands like Rob are fairly good at this kind of love. Rob was authentically willing to serve Kate in sacrificial ways. What Rob was not good at was allowing others to serve him. Most of us are good at “being there” when needed. We come without a second call and stay until the need is met. But like Peter, we are not good at allowing others to serve us. We rarely ask for help and as a result we are hard to love.

Jesus reveals that a vital part of loving others is to allow them to love us–to let them in close instead of pushing them away. Being loved is more difficult than loving. Often it requires more humility to swallow our pride and allow others to serve us than it does to stoop and do the washing. This was Rob’s problem. Like Peter, he was quick to stiff-arm anyone he loved.

Love doesn’t make the world go round, love is what makes the ride worthwhile.” ~Elizabeth Browning

Controlling the Need to Control

Relinquishing control and thrusting our feet into the warm water of human compassion is an important part of experiencing the “full extent” of someone’s love. Being self-made and independent are integral to the American way. However, the Bible teaches us to depend on each other –we’re designed that way. The following activity can help:

Using your calendar, choose two days each month and label them “Wife Appreciation” days. In the content line type in a special date place she likes and a question your wife asked about your feelings that you didn’t answer with any detail. Ask God to help you think of a way to start a new conversation. One way is to say something like, “A while ago you asked me how I felt about ______________. Because I love you, I’d like to try to answer that question.” Trust us, if you start there, the conversation won’t end there, and you’ll head home having encouraged the woman you love. Because this faith-effort can be painful, remember that pushing through pain produces rewarding results.

Relationships lose their vitality when wives who want to contribute to their marriages are pushed away by husbands who won’t control their need to control. Perhaps that is why this passage is so encouraging–it reminds us that every relationship can improve if we carry this lesson from the upper room onto the practice field of life.