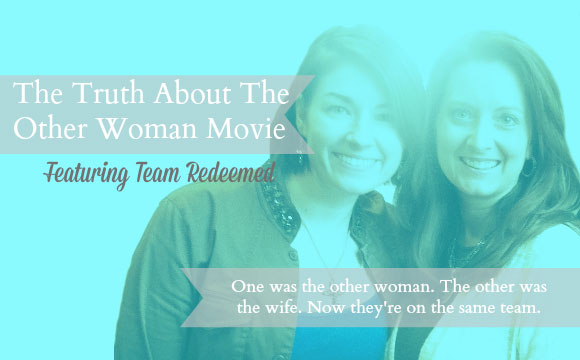 When Hollywood recently released The Other Woman, starring Cameron Diaz, audiences flocked to theaters in droves for the adultery-themed comedy. I know what the film critics have to say about it (think: unimpressed), but I was more interested to hear the opinions of two women who know a thing or two about adultery.

Once upon a time, Rebecca Halton was “the other woman,” in an adulterous relationship with a married man. Shelley Hendrix was the wounded wife whose first husband left her for his “other woman.” Together, Rebecca and Shelley have formed Team Redeemed, using their testimonies of God’s redemption and forgiveness to show that there is life after your worst day. Here’s what they have to say about The Other Woman movie.

Q: What was the overall tone of the movie?

SH: Some of the themes I noticed were: Revenge gives you your power back. Lasting love is a myth. No one gets to have a Happy Ending. But the overall tone itself was that a woman needs to take control of her love life, by not giving herself fully to any one man for too long; to make the best of the present, without expecting it to last for a lifetime; and to be okay with that.

RH: It was weird — I’d seen the previews, and knew it was supposed to be a comedy. I was surprised by how heart-wrenching parts were, not because they weren’t realistic, but because the film’s producers exclusively marketed funny moments in promotions. And sure, there were parts I laughed, but often the tone felt, just, awkward: like the writers were trying to fit square jokes through hearts’ holes.

Q: What message does the movie send?

RH: The message of exacting revenge on someone, in order to “heal,” is so backwards.

SH: And I believe it sends the same message our culture seems to be buying into, that “love for a lifetime” is a thing of the past — if it ever existed to begin with.

Q: So how does this compare with reality?

SH: I’m glad you asked. A fictional, meant-to-be-a-comedy, movie can say and do whatever they want. I don’t have a problem with that. My concern from the beginning of this movie’s promotions has been for the wounded women (and men) on both sides of real-life adultery, and its inevitable, painful fallout. Although the movie showed the wife’s pain, and some of the ensuing after affects, real life doesn’t get wrapped up in a nice, neat, pretty bow within two hours. Many, many wounded spouses deal with PTSD as a result of being cheated on for years after their own personal fallout. Getting revenge doesn’t bring you power or healing.

RH: And as a former “other woman,” I thought the movie really stereotyped the type of woman who’s capable of being duped by a married man. I sat there thinking to myself, “I didn’t look or act like that, but I was an ‘other woman.’”  For example, Kate Upton’s character is portrayed as this oblivious vixen-type, who frolics on beaches and can’t use binoculars properly. I really couldn’t relate to that (and not just because I do know how to use binoculars).

Q: Our society speaks freely about marriage, sex, divorce, relationships. But what isn’t our culture saying, that we should know?

RH: Yeah, and I feel like culture isn’t giving people honest warnings and real hope. Our culture isn’t talking about how real redemption is, after sinfully screwing up. It’s not talking about the power of forgiveness; but then again, why would we expect worldly culture to? The Church needs to rise up as a safe place for people find real hope and healing.

Q: I absolutely agree. Speaking of sin and forgiveness, what should the wife be careful of when reacting to the revelation of an affair?

SH: This is such a pregnant question. I could say so much here. Looking back to my own experience of finding out and also to the many, many stories I’ve been privy to over the past 15 years, I would say first: wives, please be cautious in friendship. In other words, please be wise in whom you choose to confide in during this time. You NEED safe relationships with grace-filled, mature believers and followers of Jesus more than you’ve probably ever needed them. You do NOT need people who will tell you how to get even with your cheating spouse, what divorce attorney to contact or other harmful advice like that. You need people who are going to help you navigate this torturous season with grace, truth, empathy, compassion, and wisdom.

RH: I know this isn’t directly “my turf,” but I have been surprised by the number of wives who have contacted me since Team Redeemed launched last June. The number-one question they ask me: how to deal with the “other woman.”  They want to know what to do or say, to make the affair stop.  I encourage them to fight for their marriages — but not in the fleshly way (often that only causes the others’ heels to dig in deeper).  Spiritual warfare on the basis of Ephesians 6:12 is really powerful.

Q: Did you get a sense that the movie sugar-coated sin? If so, what’s the danger in that?

RH: Yes, or they just glossed over sin with blanket statements.  The film is full of stereotypes, and to me stereotypes are really dangerous — because as long as we don’t see ourselves as fitting a stereotype, then we can be deceived into thinking we can relax about temptation.  One thing I tell people is that if I look too “normal” to have committed adultery, they probably watch too many Lifetime movies.  Stereotypes can also feed pride, and pride gives people a false sense of protection from sin.  I definitely thought I was above committing adultery, because I was a stereotypical “good Christian girl,” and that pride was one of the precursors to my own fall.

SH: Yes. In the same way almost every movie, TV show, book or other forms of story-telling do, so this was no surprise to me at all. While the movie did a decent job conveying the power of friendship among women and also showed what a “good guy” is like (compared to the husband), overall, the movie leans in the direction of our culture. For example, culture (and this movie) convey that sexual purity is a non-issue. While we are discussing the painful power of adultery here, the reality is that we’re actually discussing a deeper issue: where our hearts are on the topic of sexual purity. Whenever we accept that sex outside of marriage is not sinful, and that sexual activity is just a physical act, we will inevitably view adultery itself as an understandable/justifiable way to have needs met when we believe our needs are not being met through God’s design. There is definitely danger in that!

To learn more about Team Redeemed, co-led by Shelley and Rebecca, and to read other testimonies of discovering life after our worst days, visit www.teamredeemed.org, Twitter, or Facebook. You can also personally connect with Shelley and Rebecca on Twitter and Facebook.