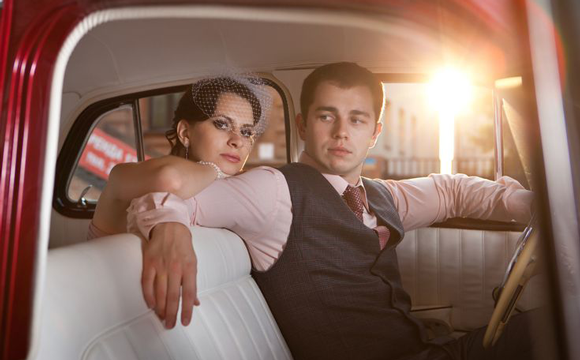 My husband and I recently made a cross-country move. We traveled caravan style, him leading the way in a U-Haul truck while I followed in my car.

I anticipated a pretty easy drive. After weeks of packing and good-byes, I was ready to cruise to a loud radio and let the miles tick past my windows. I wasn’t really prepared to give the trip full focus. As I told my husband: “Your job is to make sure we’re on the correct road. My job is to make sure I don’t lose sight of you.” Then I laughed and made some corny joke about the trip being a metaphor for our marriage.

In my mind, I had the easy job. All I had to do was follow the giant truck that had the word ‘U-Haul’ scrolled on its box. Would you like to know how many U-Haul trucks travel the American Interstate? Hundreds, it seems.  I was unprepared for that. I was also unprepared for congested construction zones, stalled toll booths, and Chicago’s renown rush hour traffic. We were separated multiple times through the 1,500 miles; it didn’t take me long to realize how foolish it is to be a blind follower. I didn’t have a map, I didn’t know where I was going, and talking on cell phones while driving is illegal in several states so I technically shouldn’t have called to get directions.

I never imagined I’d become a passive follower – literally or metaphorically. Growing up, I was a fierce, independent spirit and tomboy. I could run half-a-million-dollar machines on my family’s farm. In the fall, I’d drive load after load to the local elevator, where the elevator operator would slap my back and make some proud comment about how I, the only female at that particular co-op those years, was doing better than some of the more experienced men. At only 17, I was busting glass ceilings, one grain field at a time!

But then I got married.

At first there were some growing pains, some moments when two stubborn people butt heads (stories for another topic). But eventually, I started to realize just how handy it was to have a man around. When the arguing and the second-guessing stopped, I began to take note of how much faster everything was getting done – from housework to professional goals. Even just last week, I watched my husband put together four bookshelves in about two hours. Sure, I could have probably done them. But it would have taken all day for me to put together just one and it wouldn’t have been done correctly. And there would have been angry words and frustrated tears that later I would have denied ever happened.

I am the champion of efficiency. It is far too important to me to not waste time. So eventually, I decided that being independent was pretty impractical. My honey-do list exploded and my involvement in our marriage took a backseat.

I wasn’t oppressed; I did it to myself, remember. And I loved every minute! I mean, I was grooving to the radio while my husband was knee deep in the stress of life. And then I went on that real, literal road trip and every roadblock and traffic jam improved upon my caravan metaphor and really convicted me about my lazy, passive following.

One of my favorite marriage metaphors is the biblical imagery of the husband and wife becoming one flesh. But it’s just a metaphor. Literally, of course, we are still two individual people, which makes a caravan not too far off. You have a completely different job and daily schedule than your husband does. But what does engaged following look like? To be honest, I’m still learning.

God created woman because man was incomplete on his own. God did not create woman because man needed someone to nod at everything he said and boost his self-esteem. Adam could have domesticated an animal for that. When creating Eve, God called her the Hebrew term ezer kenegdo, which scholars point out to be a unique honor: all other places that use the descriptor ezer refer to God Himself, particularly when He saves you in times of desperation. Some of my favorite examples:

“Who is like Israel, a people saved by the Lord? He is your shield and ezer and your glorious sword.” ~Deuteronomy 33: 29

“May the Lord answer you when you are in distress; may the name of the God of Jacob protect you. May He send you ezer.” ~Psalm 20:2

The ezer appears to be the secret weapon that rescues. Does that describe your actions as a wife? Are you there to pull your husband out of every ditch he foolishly speeds into? Or are you just following him into that ditch and then citing Paul’s instructions on submission to husbands as your excuse for any marriage troubles?

Our role as Christian wives is to strive to be “ezers” again. To fulfill God’s intent for our relationship, we women must rise up and take back our role. To be an ezer, you have to be alert, intelligent, and discerning. Like Esther, who submitted to her husband and king in every way – even participating in non-Jewish customs – until the ultimate line was crossed. Or Ruth, who confronted Boaz’ stagnant nature by basically putting a neon sign in his field that said, “Hey, buddy, do you like me or not?”

“Ezers” are the ones who come through – not just the ones who try to help out sometimes. They are the definition of reliable. Today, I’m trying to be the MacGyver of our relationship – the dependable one with the creative solution to get our family out of any fix. I think the Proverbs 31 Woman was probably similar to that.

Don’t just blindly follow the U-Haul, friends. Life happens, and when you get cut off by a semi and siphoned through miles of single-lane construction for half a state, it is up to you to know the direction you need to head, where you need to arrive by the end of the day, and what shortcuts will get you reunited with your family as quickly as possible. This takes intent and effort and previous planning. Marriage is fun, but it is also work.

We cannot just sit back and enjoy a free ride while putting all the stress and responsibility on our husbands – because God did not create men to be alone.