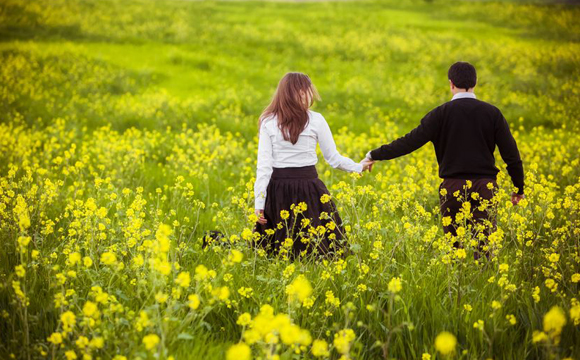 It seems everywhere we turn, there are voices granting us permission to fail. This permission to fail and still be loved—this grace—is a beautiful thing, right? Without it, we would forever feel defeated. We’d define ourselves by failure instead of acceptance.

But failure isn’t the same thing as quitting. Failure says we were on a journey and didn’t end up at the right destination—so we redirect and try again. In contrast, quitting stops mid-journey with no intention of completing what was started.

Let’s talk marriage since we’re hanging out on this marriage blog. I read an article last week that suggested some marriages were meant to be annuals—growing quickly and beautifully for a season and then dying—while others were meant to be perennials—coming back every season larger than before. This analogy stuck with me all week. I talked about it with some friends. I tried to imagine myself using this analogy in different years of my marriage and I wondered how it would have affected my thinking back then. I thought of the marriages I’ve watched die, and those I’ve watched fight to live and then thrive.

I considered all the marriage advice I’ve given over the past decade. What I realized is this: We’ve become a people who are skilled in granting others permission to quit. Not fail, but quit. I know we mean well. We want those we love to be happy and smiling and growing. We desire for our friends to have purpose and fulfillment and support. Sometimes we even believe that—if they would just call it quits with that jerk-of-a-spouse then maybe, just maybe they’d find happiness.

So we tell each other that divorce hurts, but it’s going to be alright. We’ve even seen this to be true as we watch others heal, remarry, and be happier than they were in their first marriage. We think to ourselves, “They made a good decision. This is right.” If you’d ask us, we’d all agree that divorce isn’t supposed to happen, but then again, we’ve seen it work out just fine. So who are we to call the shots? How are we to know what’s true for me is true for you?

Rather than argue a biblical case against divorce, or even a biblical case on whether or not marriage was intended to make us happy, I’d like to share with you a few of the things I might have missed had I mistaken our perennial marriage for an annual.

It’s been six years since I thought I’d be happier with someone else. In those six years:

It’s perhaps the hardest place to be—that moment when you realize you’re in a marriage that is dying. You are misunderstood. You are underestimated. Passion is stagnant. Intimacy is nonexistent. You feel trapped inside the diseased relationship and all you want is to get out—to breathe fresh air.

I want to encourage you: There is beauty in the hard work of staying. There is healing and growth and it’s in the decay of death that nutrients replenish the soil. Let your marriage die, but let it die to Christ. But don’t stay because you’re obedient, stay together because you believe the gospel is about a God who makes dead things live again. Perennials on every page.

What’s so beautiful about the Scriptures is that the exuberance of Psalms can coexist alongside the pessimism of Ecclesiastes. Both are equally true, and both work together to help us understand this beautiful thing called our divine life in Christ.