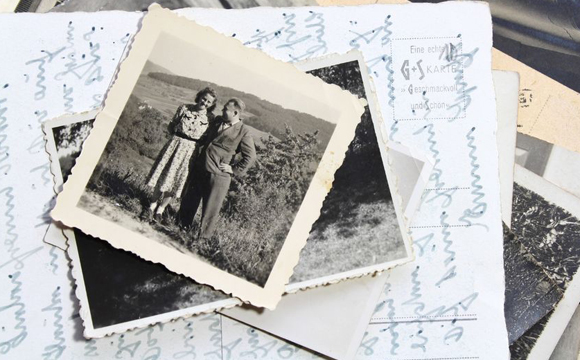 Despite withered arms marked with age spots and dark purple lesions, the kind that happen to those who have lived long and whose bodies are preparing a final farewell to this life, his presence still commanded respect and attention. As he celebrated his ninety-fifth birthday this month, my imperfectly perfect grandpa began to share memories and wisdom from sixty-seven years of marriage to my grandma.

“We were kids. We were nothing, but we were something.”

The greatest lesson I’ve learned from many moves is less is more. Possessions don’t make me nostalgic, with the exception of a single photo of my grandparents early in their marriage. Wherever I live, it’s noticeable. Their spirit can be felt through the worn black-and-white photo. Sure, nothing padded their bank account, cupboards weren’t full and grandma’s cooking was quintessential “bride food.” Nothing could have been Grandpa’s first job title, but they wouldn’t allow nothing to define who they were and what they would become.

Instinctively, they knew and believed they were something. Even if they didn’t say it aloud, they lived it out until my grandma’s death. Stepping on a plane to visit distant family in their early nineties, they continued to prove nothing would ever define them because, humbly, they knew they were something. We are something, and, like my grandparents, our marriages have the potential to send lasting ripples through our culture.

Over sixty-seven years of marriage, they built a sturdy legacy through their commitment to God, family, and a strong work ethic that fostered success for later generations. Even my son is greatly shaped by his great-grandfather’s fingerprint of determination to live life fully. I hear my young boy say, “You’re the best, Great Gramps!” and my heart sinks in sorrowful satisfaction knowing these visits are coming to an end. I’m grateful that my impressionable son was given the opportunity to brush shoulders with this family patriarch, and I wish it would last so much longer.

“We were young and full of potential.”

Regardless of our chronological age, every new romantic relationship holds the genesis of potential. Newborn relationships have energy, freshness that is a contagious reminder to those facing relationship Alzheimer’s.  With the road of memories still to be traveled, new partnerships allow us the opportunity to choose how we will define our life together. Success, however, hinges on the ability to exchange the juvenile urge to be suffocated by the wonder of love for a steadfast pursuit of something over nothing.

The story of his life nearly fully written, my grandpa thumbs through memories with the advantage only hindsight and persevering through life’s complications can bring. Hearing the story of “the only scrap we ever had,” when my young, grandma smashed a plate on the floor while adjusting to marriage, the photo of their early years comes to mind and makes my heart swell bitter-sweetly as memories surge straight to my heart. If only we could have those we love surround us forever. My grandparents’ certainty that they were something and their doggedness to strive for more created an anchor I didn’t realize I depended on until my grandma died.  Life quickly fades, yet we live as if it will last forever. We have that “scrap” with our spouse while making breakfast or cut a phone call short to resume the mundane. Instead of living outside the lines, we live stranded within the margins for weeks or months at a time. We sometimes even call this life.

Someday, we will find ourselves a faded version of our younger selves. Looking forward today will lay a foundation to create memories to savor during the golden years. Wherever you are in your relationship, talk with your spouse and picture yourselves near the inevitable end of life’s journey. Open the book of memories and take stock of what you have and hope to find. Discuss the legacy you want to leave behind and boldly strive for it. Perhaps you want to be the first couple in your family to remain married to the same person throughout your lives. Maybe you determine you want to live modestly to build a financial nest for your children. Perhaps you will commit to putting an end to a destructive habit that has been passed from generation to generation and will find help to accomplish that.

Whatever it is, each day is another page in the book of your life’s memories. Each day is an opportunity to continue to build a thriving legacy that will last because you are something!

Writing publicly was a humbling leap of faith for Julie who wrote as a private form of worship, a way to lean-in and draw-near to the Creator. A member of Redbud Writers Guild and blogger, she nurtures the wellspring of life while tackling gritty realities life (and sinful hearts) produce. Her second chance marriage has blessed her with an encouraging husband, two vivacious kids and a loving lab that keep her on her toes. Julie’s hands are spinning many plates: Wife, business partner, mama, teacher, community advocate, outdoor enthusiast and spiritual cheerleader. Visit her at Peacequility, just don't ask what's for dinner!