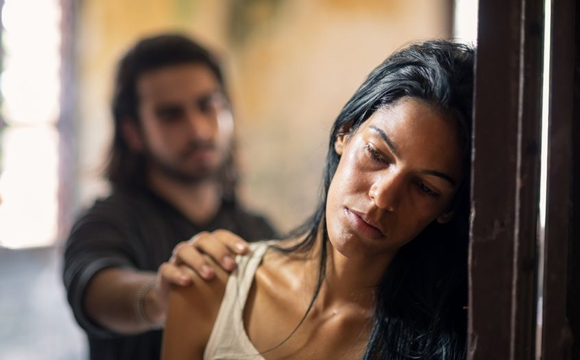 Amy and Ben had been dating for a few months when what she termed the “incidents” began.  They got into a heated argument, and he grabbed her arm so hard that it left a bruise.  The verbal assaults he laid into her soul also left a mark.  She was hurt, but he said sorry a few days later, and she forgave him. She wanted this relationship to work.  They were both committed Christians and believed that God had brought them together.

As they became closer, Ben’s violent temper began to show more frequently, and there were more bruises, both to her heart and her body.

Amy didn’t want to admit that she was in an abusive relationship; after all, she had seen this example before and it was familiar to her. She wanted his love so badly that it almost didn’t matter. Ben would vow that it would never happen again and Amy would forgive him, but the cycle would repeat itself over and over.

Close friends of Amy voiced their concerns to her; they didn’t like his tone, his way of being with her. They could tell something was “off.” Yet Amy steadfastly stood by her man, defending him even to the point of losing some of those friendships. “We are working through our issues,” she would say, but nobody really knew what was going on behind closed doors.

As much as Amy and Ben desired to be together and connected through their shared faith, their relationship was toxic. Neither had the strength to take needed time apart to get help. Although they were heading into marriage, they were not honest enough with themselves to stop and examine what was going wrong. Three years after getting married, the abuse had escalated and had become a regular part of their lives. After they had their first child, things subsided for awhile, but when tensions flared, the abuse began again, and now their baby girl was there to witness it all.

It took 4 years after marriage for Amy to finally reach out and get help. She was humiliated. Ben was angry. They took a needed separation and got help, and are still working on rebuilding the trust in their relationship.

As a pastor’s wife, unfortunately I hear stories like this fairly often—Christian couples who are secretly struggling with abuse in their relationship. Usually there is a breaking point before one of them will reach out for help, and sometimes help comes after the police have already intervened.

Christian couples in abusive relationships often distort Scripture to find reasons to excuse the behavior or stay with their abuser. Misinterpreting verses on submission, authority, and the marriage relationship not only contributes to physical and verbal abuse, but it is spiritual abuse as well. Whether it is physical abuse, verbal/emotional abuse or spiritual abuse, any type of abuse is never, ever okay with God. Partners of abusers often think if they just behave better, don’t irritate the abuser, or pray more, that the abuse will eventually go away. Unfortunately that type of thinking just enables the abuser even more.

If you are in a dating relationship that is abusive, recognize the signs and reach out for help now.

Be courageous enough to take time apart before you bring abuse into your marriage. If you are already in a marriage relationship that is abusive, seek help immediately from a professional counselor, pastor or even law enforcement. You can find a list of professional Christian counselors through Focus on the Family’s counselor referral program. I pray that if this is an issue you are currently struggling with, you will know that you are not alone, and please don’t be ashamed to seek help.

Jaimie Bowman is a pastor's wife, speaker and writer who lives in Southern California. She loves speaking truth and grace into people's lives and helping them find their unique purpose. Together with her husband and two sons (ages 6 and 8), you can often find them trying to find new places to explore. You can find out more about her at JaimieBowman.com and connect with her on Twitter and Facebook.