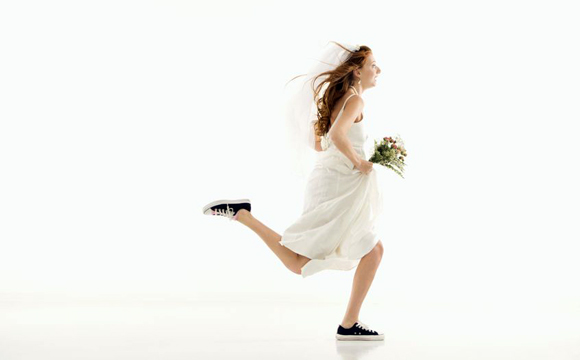 We’ve all heard the tongue clucking tale of the jittery bride who exchanges her stilettos for sneakers and high-tales it out of the sanctuary before she can even catch a glimpse of her groom’s puppy dog eyes and wanton lips! Perhaps some of us more battle weary brides are no longer clucking our tongues but pumping our fists in the air and chanting “Run! Run! Run!” realizing that, had we a morsel of foresight back then, we too may have hit the pavement and skipped the alter!

Well, I’m relieved to say that even after 7 years of marriage, I would never abandon my groom! Not then and not now. Actually, more than anything, I wish I could abandon myself and tell the ugly parts of me to runaway. My maid of honor would be the first to go.

Yes, pride in this bride has caused marital drama! Sadly, I’m not much different than many of my predecessors.

Pride caused Michal, the wife of King David to become barren. God was not pleased when she rebuked her husband for dancing before the Lord and making a fool of himself in public. Undoubtedly, she felt embarrassed by him and wondered how his silliness would make her look.

Pride caused Eve to sneak a taste of the apple even though her husband and her God told her not to. Clearly, Eve thought she knew better. Well, we all know where that decision led.

Pride led Potiphar’s wife to cry “rape” when she felt rejected by Joseph. As a result, she had to watch as God vindicated Joseph by exalting him from convict to commander of Egypt. All the while she remained in an unfulfilling, broken marriage torn apart by her own hands.

After all, wasn’t it Lucifer’s self love that got him kicked out of heaven?

There was a time in my marriage when nothing my husband did or said was good enough for me. Yes, I loved him deeply but I longed to change him into my image of the perfect husband. His level of education wasn’t high enough for me so I nagged him to earn a college degree. His job wasn’t secure enough for me so I hounded him to find a better one. He was way too outspoken about spiritual matters so I squeezed his leg under the table or shot him dirty looks from across the room when I disapproved of his conversations. My expectations of him were unreasonable. He had no freedom to be himself.

Underneath it all was my prideful hope that people would look at us and see “the perfect couple,” well educated, well paid and well spoken. One night all of that changed. My husband looked at me with grief in his eyes and said, “I always hoped God would bless me with a wife who accepts me no matter what. I’ve never felt that kind of love from anyone. Jennifer, you don’t accept me and it’s breaking me.”

At that moment, I wished the earth would open and swallow me. What have I done? My husband was a gift given to me directly from the heart of God and I’ve acted like a spoiled child.

I melted into nothing as God held up a mirror imploring me to look at my prideful heart.

It has taken time and diligence to rebuild my marriage. These days, my husband comes first. I see him before I see anyone else around me. I consider his feelings before I speak carelessly. I’d like to say it comes naturally but I’d be lying. It’s a conscious choice that requires me to reign in my fleshly desire to appear polished.

Through it all, God has shown me that humility is the path to love and relational peace. Humility brings about God’s plan. Humility wins.

In humility Tamar pushed aside the shame of childlessness, dressed as a temple prostitute and had relations with Judah in order to honor and secure the bloodline of her deceased husband. God not only rewarded her with twin sons but, through her lineage, the Savior of the world was born!

In humility Ruth pledged her loyalty to her mother in law Naomi after the death of her husband. God rewarded Ruth’s faithful gesture by blessing her with a new groom, Boaz. Through their union, Obed was born and his lineage brought forth the birth of the great King David.

In humility, Hannah went before the Lord and prayed for a child! She couldn’t bear the sadness of an empty womb. God blessed Hannah for recognizing her need for His touch and He rewarded her with a baby boy, Samuel, who went on to be a great judge of Israel.

When pride comes, then comes disgrace but with humility there comes wisdom.”
~Proverbs 11:2

Pride has the power to devastate any marriage. Don’t run away because of it.

Lay it down before the altar.

Jennifer Roos has a passionate pursuit in life—to fully surrender herself to God’s agenda. While learning to live this out in a real world with real issues, she shares her experience to inspire women of all ages to free their faith and be bold in their pursuit of Godliness. Jennifer has served as a Secondary English teacher in both Christian and secular private schools, an International Academic Advisor at a University in New York and a Missionary working short term in over 30 countries. But... none of those roles were nearly as challenging as the one she's in now; wife and stay at home mom. She currently lives in Chicago with her husband, Wouter and two children, Makaio and Mikayla. Jennifer blogs at www.jenniferjroos.com She is also a contributor at Unveiled Wife.