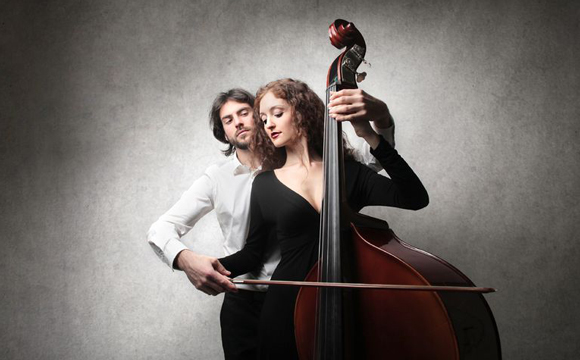 I was a Christian gal, and he was a Christian guy, and we had every intention of putting “Christ at the center of our marriage”. Much like music-fans dream of one day creating achingly beautiful musical compositions, so we two marriage-fans dreamed of a marriage centered on Christ and filled with harmony.

Prelude
However, we soon hit discord. We wanted a Christ-centered marriage, of which my hubby would be the spiritual leader – but we didn’t know what notes to play. What did this look like in practice?

I had come into marriage thinking that spiritual leadership meant that my husband would be my conductor: he would orchestrate our spiritual walk and take responsibility for my spiritual development. I had no idea what that actually meant in practice, but nonetheless – I came in expecting a conductor. At the very least, I imagined that as the spiritual leader in our marriage, my conductor-husband would lead devotions as a couple (and later as the father of our children), and that we would spend a significant time together in joint, audible prayer. He would be a bible study leader, a mentor, and a mini prophet, priest and king to me. All without being overbearing, of course.

What a shock it was to discover after our wedding that my husband was, in fact, still exactly and identifiably… my husband. He had always been private and introverted, and yet I was horrified that marriage did not transmogrify him into someone who liked to initiate deep conversations about spiritual things! He did not want to spend hours in intercessory prayer. He did not initiate a new schedule of reading the bible together in a year. He did not utter any prophecies.

For months, I wrestled with my disappointment that my husband was not the “spiritual leader” I had hoped for. How were we to flourish as a couple if he didn’t step up to the plate? How could we be on the same page spiritually if we never had the same page of Scripture open? How could we make Christ-centered-choruses if my husband would not conduct?

Interlude
It has become the pattern of my marriage that whenever I am in the midst of a frustrated cadenza of disappointment with my husband, that God slows me down by showing me something disarming about myself (a divine ritardando, if you will). A marital spat brought me back to Ephesians 5 once again, where God speaks of his spiritual expectations for husbands:

Husbands, love your wives as Christ loved the church and gave himself up for her…” ~Ephesians 5:25

I read about how husbands were to love their wives self-sacrificially, in such a way that they flourish. I read how they should cherish their wives as their own bodies. Then I read 1 Peter 3:7, with its injunction to husbands to honor their wives and live compassionately, so that their prayers would not be hindered.

I began to ask every older, married couple I could find about how much of their devotional life they practiced together. I was stunned at the variety of responses. Some prayed together daily. Some never prayed together. Some read books aloud together. Some did not. Some did quiet times at the same time of day in one anothers’ company. Most did not. In fact, most said they had landed up keeping the same devotional practices they had had as singles. All the couples I asked were godly, Christ-centered people, and no two had the same answer as to what husbands and wives were “supposed” to do devotionally.

I realized that much like we often reduce the concept of corporate worship to the notion of an audience singing along with a guy with a mic and a guitar, so too our Christian cultural norm has come to see spiritual leadership in marriage as meaning “a husband leading a mini bible-study with his wife”.

There are MANY ways to express worship corporately, and singing with a guy and a guitar is a wonderful and valid way to do that – but it is ONE way and not THE ONLY way for believers to express the Biblical truths about worshiping together as the family of God. Similarly, regular, joint intercessory prayer times and joint bible studies are wonderful and valid ways for husbands and wives to express their joint faith – but that is ONE way of doing it. It is not the only way.

Finale
The music of Christian marriage is not comprised of a husband conducting and a wife playing along. Rather, it is a spiritual duet. When two musicians come together to play a piece, each of them is responsible for their own practice and preparation.Some like to practice together. Others prefer to practice apart. However, no matter how good one musician is, they cannot compensate for someone else who is playing badly or is not playing at all. So too the medley of a Christ-centered marriage means that both the husband and wife are responsible for their own Christ-centered practices. No matter how godly one partner is, they cannot make a marriage Christ-centered on their own.

It was unfair and unbiblical of me to expect my husband to somehow assume responsibility for both our parts of the duet. He has his own skills and temperament, and I have mine. We BOTH have to play. The bible has called him to love and cherish me in such a way that I flourish; but he does not have to do that by leading a bible study every night before we go to bed. Reading my bible is my responsibility. Reading his bible is his. And when we both keep up our practices, our little duet is more harmonious.

Spiritual leadership, as it turns out, is not so much about him leading me as it is about him following Christ; and me making every effort to do the same. I’m following him as He follows Christ.

And that, friends, is music to our ears.