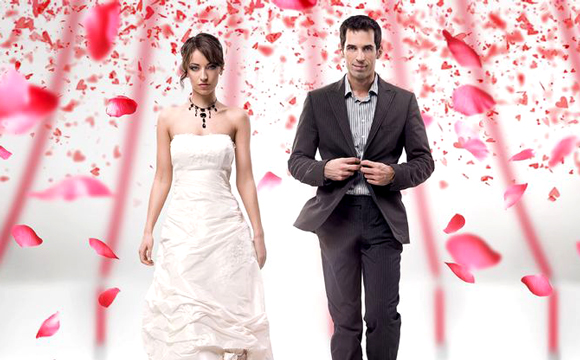 When it comes to the man who pretzel-twisted the consciousness of humankind with his theories of evolution, we are all entitled to our druthers. However, when it comes to the marriage of Charles Darwin to his wife, Emma, we cannot discredit him entirely. Any couple that can stay married with TEN children must have some light to shed on the subject. If we can get past their polarized views of science and religion and the fact that Charles once said that having a wife was (and. I. quote.) “better than having a dog anyhow,” perhaps we can shelve our angst over Charles’ fascination with worms (and his assessment of wives vs. canines) long enough to peer into the Darwins as husband and wife. Emma, a devout Christian, endured a lifetime of Charles’ neurotic obsessions.

Sweet. Sweet, Emma. We can live with his quirks for three minutes.

Writer for The New Yorker, Adam Gopnik examined the Darwins in response to the question, “Is there a secret to a happy marriage?” He says:

Marriages are made of lust, laughter and loyalty–but the three have to be kept in constant passage, so that as one subsides for a time, the others rise.

Church people, generally speaking, are about as uncomfortable with the term “lust” as they are with the term “evolution,” but since we’ve agreed to move past our anxiety with the latter, let’s consider the first ingredient. In a degrading context, “lust” deserves it’s bad rep, and so I’m perfectly cool with opting for a more diet-lust term like, “desire” or even “marital zest.” And yet, for the blessed sake of alliteration…what does it mean to lust after your spouse? The dictionary is not often the steamiest read, but it does color the term for us a bit.

“Lust” according to Webster (who for all we know may have been an expert on the topic itself) is:

2. a passionate or overmastering craving for

or my personal favorite…

When it comes to sex, who isn’t in the market for a little “ardent enthusiasm”? Granted, marriage cannot be solely based on the sexual benefits, but it’s a big enough priority to make it into the top 3. (And all the male readership gives a resounding, “Amen.”) Gopnik said, “The people who write books about good sex are never people you would want to sleep with.” If this statement is even remotely accurate, I will hastily conclude that when it comes to marriage, think of lust as gravy.

If lust is the gravy, then laughter is the grease.

Before Clark and I met, I was under the romantic conviction that Meg Ryan starred in every movie that was ever worth watching. (Except for that one with Russell Crowe. That’s when Meg really began to lose her spunk.) Any Sci-Fi flicks currently inhabiting our movie bin are there for one reason and one reason only–I inherited them by marriage. Hellboy. Total Recall. The Fifth Element. It has taken nearly a decade, but our interests have slowly morphed into a sort of an alter-dimentional-paranormal-romantic-geek-drama-with-a-splash-of-forensic-British-comedy…genre. Which is why the TV series “Fringe” has done more for our marriage than any therapy ever could.

Me: “Why aren’t you home for dinner yet?”
Clark: “I told you I was working late.”
Me: “No, you didn’t.”
Clark: “Oh, sorry. I must have told my wife from the alternate universe.”

There it is. The grease. And the geekier the greasy-er in my opinion. The beauty of the grease is that it doesn’t matter if anyone else is amused. He and I are in on the secret funny when no one else is. And bonus, what could have ended up a tense and disappointing beef between us has now been successfully…de-beefed. For some, it’s Harold Ramis. (Who are we kidding, for most people, it is Harold Ramis–rest his soul). No matter what pops your corn, the secret of success in any marriage (and while we’re on the subject, human existence) is to above all to never lose your sense of humor…or your copy of Groundhog Day. When life is one big inside joke between you and your spouse, you tend not to take yourselves too seriously. Laughter is one sure sign that the marriage can and will last.

And yet, life is not a barrel of fun all the time.

When lust and laughter subside for a season what is the glue that binds husband and wife? Plenty of couples stick it out for decades because of the children, or the money, or illness, or religious conviction, or pride in an iron-clad commitment of “’til death do us part.” These hardcore loyalists have the will to tough it out that is stronger than the itch to ditch. Loyalty is the glue, but does that make for a happy marriage? Yes and no. There’s something to be said for couples that dig in and make.it.work…no matter what. But I prefer Gopnik’s threefold recommendation for matrimonial bliss:

Be lit by lust, enlightened by laughter, settle into loyalty, and if loyalty seems too mired, return to lust by way of laughter…the three-part formula of lust, laughter and loyalty is one in which you can only return from one end of the equation to the other by passing through the middle term.

So, a happy marriage is sustained by not one, not two, but all three elements of lust, laughter, and loyalty. Every intimate exchange, side-splitting guffaw, and act of sheer will power beats a well-worn path between my husband’s heart and mine. Thankfully, Charles Darwin has contributed more to our wellbeing than the knowledge of the varying mutations of bread mold. At the very least, he had to be good for a laugh. How else did Emma survive 43 years as man’s best friend?