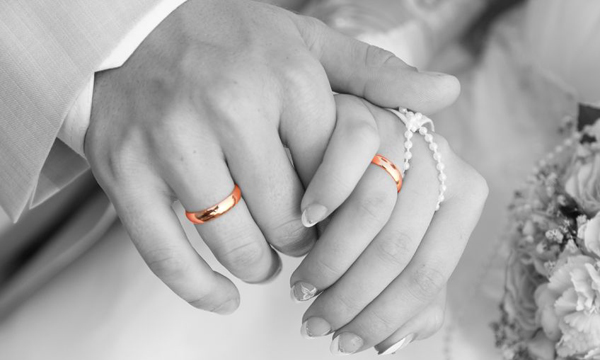 For far too many people, the subject of marriage is like a three-ring circus. First, there is the engagement ring. Next comes the wedding ring. Then, there is suffering!

One lady said that she got married because she was looking for the ideal but it quickly turned into an ordeal, and now she wants a new deal. And one man said that he and his wife were happy for twenty years… and then they got married.

We laugh, but these kinds of feelings are far too pervasive in marriages today… a reality that I hope you will avoid when you choose to get married because feelings like these can lead to a crack in your relationship with your spouse and push you dangerously close to a breaking point.

That’s dangerous because the break-up of a marriage these days doesn’t seem to carry the same gravity that it did in the past. So-called “no-fault” divorces offer the option of an “amicable” split, which has led to the ending of many marriages without even a hint of remorse.

It reminds me of a guy who went to the Super Bowl. The stadium was packed, but the seat next to him sat empty. The man behind him questioned him about the empty seat. He answered, “That seat was for my wife.  She would have been here, but she died.”

The other man offered his condolences and asked him if he didn’t have a friend that he could have asked to come with him rather than let the seat remain empty. The man replied, “I do, but all my friends said they wanted to go to the funeral instead.”

Now, I realize I’m making light of a weighty subject, but I’m doing so to illustrate how the seriousness of the wedding vows no longer seems to be honored.

Statistics remind us what we already know; either from personal experience or from our friends, that over 50 percent of all marriages will end in divorce. Over half of every promise made that “until death do us part” gets broken! I know that doesn’t sound like very promising news for you as you make your way to the altar, but – friend, you don’t have to be a statistic.

I’m convinced that one major reason for this unbelievable statistic that I want you to avoid is that we don’t understand the nature of the agreement we make when we get married. And if we do not understand this agreement… if we do not view it as God does… then we will not be prone to protect it. What’s even worse, we won’t benefit from it.

One day a boy lost one of his contact lenses. He spent a lot of time trying to locate it, but he couldn’t. Eventually, he told his mom. The boy’s mom began looking for the contact lens with him and found it in a matter of minutes.

It all depends on how you view it!

Marriage is a covenantal union designed to strengthen the capability of each partner to carry out the plan of God in their lives. You cannot leave God at the altar and expect to have a thriving marriage. God must join you in your home according to the aspects He has set up in His covenant. When He does, and when you abide by His authority, your marriage will not be a statistic, but rather it will be a satisfying tool used by God to advance His kingdom both in you and through you.